Biggie & Mr. Dinkles are supporting characters in Trolls and has appeared throughout the series ever since.

Biggie is a tall, fat-looking blue troll. He has periwinkle hair that is quite short compared to other trolls' hair, and a pink nose. He wears a purple waistcoat and shorts. His overall height makes him not only one of the largest of the Pop trolls, but he is one of the few Trolls whose height is comparable to the Funk Trolls, who are the tallest Trolls in Troll Kingdom.

Mr. Dinkles is a small greenish-yellow worm with pink stripes across his body, purple eyes, blue lips and a dark green top hat. While he is incapable of talking for the most part, he usually makes a squeaky "mew" sound (in Trolls: The Beat Goes On!, this becomes a "meep" sound). As a running gag in the 3D animation, Mr. Dinkles actually has a deep bass-y vocal as seen in Trolls Shorts episode "Trolla-Palooza Tour" where he sings the song Low Rider. He also sings "Rainbows, Unicorns and Everything Nice - Brush your teeth!" in Trolls World Tour in the style of a heavy metal vocal. 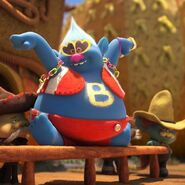 Biggie at Lonesome Flats
Add a photo to this gallery

Biggie has a big heart, and is one of Poppy's dearest friends. He's generally shy and easily frightened, being said in some sources to be a bit of a crybaby. The other Trolls, however generally don't like seeing Biggie upset. Biggie is honest about things, relies on others at times but has value in the simple promises people make to others. When upset, Biggie will say why; he demonstrates this by angrily telling to Poppy that she messed up when she breaks her "pinky promise" in Trolls World Tour. He also considers himself "cute", and is upset by the prospect in the Lonesome Flats jail that he's no longer cute.

Mr. Dinkles doesn't have much of a personality, but he's shown to be quite mischievous.

Mr. Dinkles is Biggie's best friend. Biggie cares and loves Mr. Dinkles so much, he also makes sure to keep him safe. Biggie carries Mr. Dinkles around everywhere. He would do anything to save him, and loves him with all of his huge heart. He is shown to always carry him, and when he doesn't, he is shown yelling and searching frantically for his pet worm.

Biggie holds Poppy in high regard and has expectations of her. He expects her to keep her word as queen and is only disappointed in her when she fails. Yet no matter how scared he gets, he at least attempts to go and save her even if it ends in failure and him helplessly only able to watch events unfold.

According to Poppy in Friend Matching, he and Ripley Wisp are compatible and should be friends. However, because Poppy told the pair they have chemistry between them, the meeting between them became awkward and their friendship never took off.

Biggie has most normal Troll abilities, but Mr. Dinkles is just a worm.

Biggie's physicality comes into account sometimes when it comes to weight and size matters, due to him being larger and heavier than most Trolls.

Biggie's hobby is photography. He mostly takes pictures of Mr. Dinkles and other critters.

As seen in the Trolls Holiday Shorts episode "Dress Up", Biggie likes to play dress up, usually on Mr. Dinkles. Biggie doesn't usually dress up himself but in the "Dress Up" episode he dresses up as Branch and Mr. Dinkles was dressed up as Poppy and they re-acted the introduction of Branch from Trolls, but Biggie tweaked it to make it more obvious of Branch's feelings towards Poppy.

Biggie is a tenor vocalist. As a Pop Troll, he's into Pop music.

Mr. Dinkles can sing, but he rarely does this. When he does, he has a deep baritone or bass vocal, as heard in Rainbow, Unicorns, Everything Nice. Mr. Dinkles has sung in two songs, though neither of them were Pop songs.

When Biggie returns to Pop Village in Trolls World Tour after Queen Barb attacked, he takes the position of substitute leader over the remaining members of The Snack Pack, in absence of Poppy and Branch as they go to rescue Poppy.

Biggie appears during the Trolls introduction and is seen with the group as Branch sarcastically applauds them for being so loud, as he argues the Bergens will find them. The group mocks Branch, though Biggie is not one of the members who joins in. Branch escapes when hug time occurs.

During the 20th anniversary of the freedom from Trollstice, Biggie is seen at the party Poppy throws to honor her father King Peppy. When Chef attacks, he panics because he can't find Mr. Dinkles, who is stuck to his back. This leads to the pair being captured along with the rest of The Snack Pack.

They are taken to Bergen Castle at Bergen Town by Chef and kept in a cage. The group witnesses Creek being eaten after Chef tries to force fed the Bergen King King Gristle Jr.. Chef then hands the cage to Bridget to look after.

Poppy and Branch rescue the group, who end up being stored in Bridget's room. After Bridget tries to recapture them once Branch frees the group, the trolls come to an agreement. They help Bridget get a date with King Gristle Jr. and she helps them get Creek, as Poppy can't accept that Creek is gone.

The group invents a alter ego for Bridget called "Lady Glittersparkles". They land her a date with the King. After finding out Creek is indeed alive, they attempt to rescue him. Their attempts end in confusion as the group is re-captured, now including Branch and Poppy. Creek reveals he has sold out the entire Troll Village to save himself.

The entire Troll population is thrown into a pot, after seeing Poppy turn grey Biggie and Mr. Dinkles both turn grey as well, as the entire village gives up hope. Branch starts to sing which restores hope to Poppy and in turn the entire village. Bridget frees the Trolls and sacrifices herself by going to the Bergens with an empty pot.

Poppy not wanting to see Bridget ruin her life goes back with the group to save her. They recreate the wig of Lady Glittersparkles seriously and show the King where his love interest actually is. The entire feast of Trolls is cancelled and the Trolls show the Bergens how they can be happy without eating Trolls.

Biggie and Mr. Dinkles play dress up with each other, with Biggie as Branch and Dinkles as Poppy. However, Biggie has changed the script. When Poppy comes to visit them, she is shocked at their play and tells Dinkles to add more glitter before she leaves disturbed. Dinkles then speaks, shocking Biggie.

Biggie is part of the team that jumps out and startles Branch in his bunker when Poppy gets him on board her plan. Smidge, Biggie and Fuzzbert weren't given specific roles during the presentation to the Bergens of the Troll Holidays.

Biggie briefly goes on a mission with Poppy and Branch on uniting the other Tribes. But after witnessing the ruins of Symphonyville and being held captive by Delta Dawn, he stresses out and believes that Poppy has broken her "pinky promise" with him with being abducted by Chaz as the last straw, thus bailing out and abandoning Poppy and Branch.

After returning to Troll Village, nonetheless, Biggie realizes that the village has been destroyed and regrets for leaving Poppy and Branch behind. To make up for his mistake, he and the rest of his surviving friends dress up as rockers to infiltrate into Volcano Rock City. He and the other Trolls lose their colors, but later regain them as they join in the singing of the unification of the Tribes.

Biggie's concept did not vary much in development, and most of the changes shown in The Art of the Trolls just had to do with attire. He was shown to care a small critter, although the type of critter was not decided.

Dinkles concept art, as seen in the Trolls DVD extras

Biggie Concept art, as seen in the Trolls DVD extras
Add a photo to this gallery

Biggie is the biggest member of the Snack Pack, with the biggest heart. Underneath his imposing exterior he’s actually a huge softie, constantly bursting into tears at touching moments, or even at the sight of a particularly picturesque sunset. He carries around a worm named Mr. Dinkles with him everywhere he goes, and occasionally dresses him up in adorable little outfits for impromptu photo shoots.

Worried that Queen Poppy is leading the Pop Trolls astray, cotton-candy-obsessed Biggie and his faithful (mostly wordless) companion, Mr. Dinkles, accidentally join the adventure when they get stuck on balloon Sheila B.

Biggie was an unlockable character in Trolls: Crazy Party Forest!. In the character description, he's referred to as a "giant" Troll whose favorite activities are swimming and dancing.

Retrieved from "https://trolls.fandom.com/wiki/Biggie_%26_Mr._Dinkles?oldid=42657"
Community content is available under CC-BY-SA unless otherwise noted.