Classical Trolls are a race of trolls who appear in Trolls World Tour. The leader of this miniature Tribe is Trollzart.

The Classical Trolls have large heads and small bodies in proportion to the other Tribes. They have wings and large bushy hair with flecks of glitter in them. All seen thus far have the Treasure Trolls "wishstones" on their belly that are the same color as their hair. They also have a light plaster of glitter, similar to Glitter Trolls, but lacking in the amount a Glitter Troll would have. They have a golden velvet skin color and gossamer wings. Compared to the other Tribes, the members of the Classical Tribe are among the smallest Trolls, with only individuals such as Smidge comparing to their height. They're also one of the Tribes to not normally wear clothes, with Trollzart being the only Classical Troll to do so, and having only a black coat.

Most of the Classical Trolls are randomly generated, and they appear to be the Tribe with the most uniformed appearance. All of them have the aforementioned golden skin and puffy hair, the latter of which can be one of 4 colors: pink, white, light green or blue. Females have a thick band of eyelashes. Trollzart stands out from his people with his coat and white-gold hair.

Baby members of this tribe don't particularly stand out and look almost the same as adults; they're slightly smaller in size and have different body proportions.

A male classical Troll with a triangle 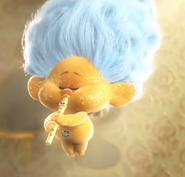 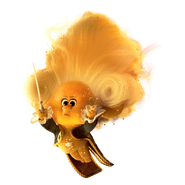 Trollzart
Add a photo to this gallery

The Classical Trolls don't have a royal family and are instead led by a conductor. Wherever the conductor goes, the general population follows. Otherwise, they go about their daily lives.

The Classical Trolls like classical music, their lives centre around a Orchestral focus with Trolls all coming together to make music. The tribe like elegance and unity. Their music puts more emphasis on harmonies and instruments, but lacks lyrics.

What tends to be the biggest change between individuals is just the instruments they play. For larger instruments, like a harp or drum, several Trolls have to work together, with one to four trolls holding the instrument so another one can play it.

They have yet to be shown dancing.

Barb calls their music "boring" due to its lack of lyrics, and has her Rock Trolls defeat them by playing their own music in Rock style. Although, in Trolls World Tour: The Junior Novelization, it is said that they have big, operatic vocals.

When seen on the offensive, the Classical Trolls move as a single group in formation, with Trollzart leading the charge and the others not loosing the formation they held prior to the offense. It takes a number of Classical Trolls to form an orchestra, thus many to defend their culture.

They tend to Eighth Goats.

The Classical Trolls didn't display either a means of record keeper or an apparent lack of one, probably due to their limited screentime. However, Trollzart was able to identify quickly that Barb was a threat to them.

The Classical Trolls have limited technology,; everything is whimsical and quaint.

They have fauna such as "Eighth Goats", which they shepherd.

Their home is among the mountains and clouds in Symphonyville. They fly together in the sky above to make music.

Their homes are based on caves and their home looks like a painting.

They have the ability to fly, due to their wings. This is a trait that none of the other Tribes have.

Classical Trolls fight together as one orchestra, but are completely defenseless once their group is taken down.

At some point in the past, the ancestors of the 6 Tribes created 6 Strings for each type of music after one made a sound. As their name suggests, they were centred around Classical music and they held the String of classical song. They partied with the other Trolls celebrating their music and everything in between with the other Tribes. However, the Pop Trolls stole the White Harp housing the Strings and decided to keep all the music to themselves. As a drastic measure, the other 5 tribes grabbed their strings and ran. The Classical Tribe settled in the mountains.

When Queen Barb invaded Symphonyville, Trollzart spearheaded a retaliation against the Rock Trolls, but ended up losing and being abducted. Symphonyville was left in ruins. The entire Tribe was gathered up and taken to Volcano Rock City with the intention of turning everyone into Rock Zombies.

The Guitar which had held the Strings Barb took from the 5 other Tribes was smashed by Queen Poppy after a failed attempt to convert the Queen of Pop. The Trolls lost their music but regained it when they realise the music came from them now.

The Tribe is no longer isolated from the rest of Troll Kingdom, now living with the other Tribes in harmony again.

Classical music refers to the music of the 16th to 20th centuries, before the raise of modern music. It is the source of many modern music theory practices and has influenced all musical genres in many ways both major and subtle, either directly or indirectly as modern music evolved from one genre to another. It is easily identified by its traditional orchestral and complexity of sounds that favour harmony and rhythm, using traditional western instruments like the flute, violin or harp. Of the 6 Tribes, the Classical Trolls are therefore a Tribe whose music is one of the oldest genres.

Trollzarts name and design comes from "Mozart" and his name itself is a combination of Mozart name and "Troll".

The tribe itself appears to be based on Cherubs; merchandise related to Trolls World Tour also describes them as cherubs.

Their home is meant to look like a heavenly painting, the Trolls live in rococo covered fabric caves. They are hugely inspired by Baroque and Romantic periods.[1]

Retrieved from "https://trolls.fandom.com/wiki/Classical_Trolls?oldid=50747"
Community content is available under CC-BY-SA unless otherwise noted.