Country Trolls, also known as Country Western Trolls, are a race of Trolls who appear in Trolls World Tour. The leader of this subspecies is Delta Dawn.

These Trolls resemble a more common Troll body type from the waist upwards, save their choice of attire, but are centaur-like from the waist down with hooves and tail. They have the same felt-like skin as Funk trolls and Pop Trolls. They have large front teeth at the front of their upper jaw and either rounded or pointy ears. Their tail is sometimes, but not always, a different color to the hair on their head. This hair is puffy, but does stick up, though many members have it platted especially if they're female. They tend to have a beigetone coloration.

At first glance, they appear friendly.

Most of the Tribe members seen are randomly generated. Females are identifiable by their eyelashes. Colors vary per individual and they either wear full-body outfits that cover everything but their head, hooves and tail, or just a jacket or shirt around their chest area. They also often have various headwear, which can vary from hats to headbands. 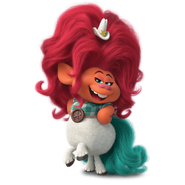 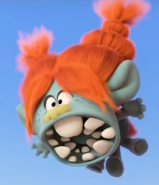 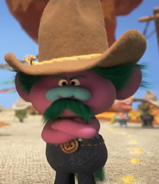 Growley Pete
Add a photo to this gallery 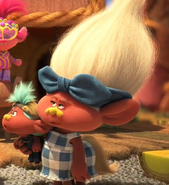 A female Country Troll and her child 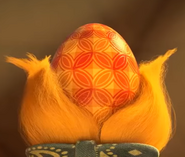 An egg in the hair of a Country Troll

Family unit
Add a photo to this gallery

The Country Trolls don't have a royal family, instead being led by a mayor who doubles at times as sheriff. The mayor leads them in song, and is in charge of keeping their people together, as well as enforcing the rules on lawbreakers.

Both Born to Die and I Fall to Pieces are sorrowful songs that intend to evoke empathy to their listeners, being about despair and hardship. These songs are able to bring emotion to other Country Trolls, which shows that they've gone through a lot over the years.

Their dancing generally involves a line dance movement, with them kicking their front legs and moving their arms to the music.

In Trolls World Tour: The Junior Novelization, the Country Trolls use each others' tails to make strings for instruments.

The Country Trolls love Country music, and their life is one big shindig. Although they appear friendly at first, these Trolls can be mistrusting towards strangers, especially towards Trolls of other Tribes, and can show aggression. Children might be expected to work from the moment they're born by their parents.

Outside of town is also a mineshaft, which was seen some distance from Lonesome Flats during the chase scene when Poppy and her friends are escaping. Presumably, the mine is in some use by the Country Trolls, although no miners were seen in the scene. It's also unknown what's being mined there, but it does confirm that the Country Trolls dig for resources.

The Country Trolls themselves didn't seem to know what Pop Trolls were when they first met them, and displayed mixed reactions to them, until Queen Poppy, Branch and Biggie started singing. They had heard of Queen Barb and her Rock Trolls, and thus seem to live more to "word of mouth".

In a cut scene from Trolls World Tour, Hickory met Poppy, Branch and Biggie before they arrived at Lonesome Flats. In the cut scene, he noted the Pop Trolls were bipedal, making them odd to him. The Country Trolls in this version of the movie had never seen bipedal Trolls, nor had thought the prospect possible at all, thus furthering how much the Country Trolls hadn't kept records of other Troll kinds at all. However, one of the early drafts of the jail scene with Poppy, Branch and Biggie contradicts this by showing a family of bipedal skeletons.

The Country Trolls have rather low technological advancements in comparison to some of the other Tribes. Though Delta Dawn's song Born to Die offers a simple explanation for this: they focus on getting by in their harsh environment, toughing themselves against life's problems rather than trying to improve that life they have.

They live in the desert, and their town is based on an old western-like setting. The place they live in is called "Lonesome Flats".[1]

In Born to Die, it is shown that they have a BBQ shop where their animals go in and burgers come out. The Country Trolls appear to be carnivores.

Because of their four legs, they're quite fast at running, have great endurance and are quite strong. Several Country Trolls chased Hickory, who was also hauling Poppy, Branch and Biggie across the desert sands. None of the Country Trolls showed signs of exhaustion during this chase scene, suggesting that they're the physically strongest of the Tribes, further supported by them surviving in a much harsher environment.

Male members of the Tribe can also use their facial features as a lasso.

It's unknown if this only applies to Clampers Buttonwillow, but it was shown that she's able to use her teeth like a drill and rotate them. It's clear the bite from these Trolls is not very nice, and Clampers was able to bite through Growley Pete's mustache.

At some point in the past, the ancestors of the 6 Tribes created 6 Strings for each type of music. As their name suggests, they were centered around Country music, and held the String of Country. They partied with the other 5 Tribes in one big party until the Pop Trolls stole the Strings. After retrieving their String, the Tribes ran away and parted ways, each going into isolation away from the other Troll Tribes.

The Country Trolls settled in the wild deserts.

The Country Trolls heard of Queen Barb's Rock World Tour when she began to seek the Strings, but weren't bothered by the approaching Rock conquest. When Pop Trolls Queen Poppy, Branch and Biggie arrived in Lonesome Flats, Delta felt sympathy towards them because of their bright coloration. They were more bothered by their lack of taste in music, and Delta threw them in jail for "crimes against music". The trio escaped thanks to Hickory's meddling.

They chased them out of town and almost grabbed them, but the group escaped. At some point later, the Country Trolls were invaded by Barb and her Rock Trolls. The event occurred offscreen, but the tough Country Trolls had been no match to the Rock Trolls, who took their string and captured all of them. The entire Tribe was taken to Volcano Rock City, where Barb intended to convert them all into Rock zombies.

They succeeded in converting Delta and her niece Clampers, but the Guitar holding the Strings was smashed. This appeared to destroy all music, turning all the Trolls grey. They quickly realized they no longer needed the Strings to make music, and thus regained their colors. The Country Trolls are now reunited with the other Tribes and no longer isolated.

The Tribe's theme is "country music". Country music is a music genre derived from folk music and blues, originating from the southeastern United States, eventually also coming to refer to "Western" music as well, which rose up to mimic country music in the western United States. Country and Western music originate from areas of poverty or poor wealth, and are associated with countryside, with Country being the music of the "hillbilly" culture. The genres of Country and Western often focus on the vocal viberto, maintaining a "southern twang". It also goes for steady music often romanticizing certain subjects or appealing to the like-minded. While it has a steady band with a variety of traditional instruments, it also makes use of unconventional or improvised ones such as the washboard.

Their centaur design is likely a reference to cowboys, who are often depicted horseback in popular media. Their attire is also based off of them, as is their wild west-styled town.

The decision to use quilts for their landscape is based on how from an aerial point of view the landscape of farmland looks like a giant quilt. Quilts were common sleeping blankets in the frontier.[2]

Retrieved from "https://trolls.fandom.com/wiki/Country_Trolls?oldid=50754"
Community content is available under CC-BY-SA unless otherwise noted.