Creek is the hidden secondary antagonist of Trolls.

Creek is a purple troll with blue, teal and green long straight hair. He has thick blue eyebrows and a peach-colored nose. He has blue eyes that can sometimes look purple in certain lighting. Creek wears yellow yoga pants sewn with darker yellow thread. Creek is considered quite attractive to other female Trolls in the village, and concept art indicates he was designed to be somewhat of a "pretty boy"-looking Troll.

Creek has a serene, Zen-like state of mind. Like most trolls, he is positive, excitable and deeply dislikes "bad vibes". His personality, from his belief of things such as "auras", indicate he was based off a hippy.

Creek often sees the bright side of things and tries to put a positive spin on everything. Even when he betrayed the others, he spun things around to make out he was doing a favour to Poppy by letting her get eaten with a clear conscience. He states that he in contrast will have to live with guilt for his betrayal. Despite his calm outward perspective, Creek is in reality a coward who was willing to betray his whole tribe just to save his own skin.

When Creek returns to the Troll Village in Trolls: The Beat Goes On!, he asks for forgiveness, under the claim that the events of Trolls have left him enlightened. Though everyone eventually welcomes him back, he has grudges against Branch. He's shown to be a lot more selfish than in the movie despite being "enlightened", and even taking advantage of his rivalry with Branch, who sees Creek as manipulative and untrustworthy. 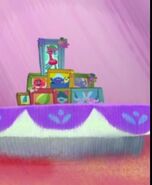 The photos as they appear in Trolls: The Beat Goes On!. Branch replaces Creek, signalling Poppy no longer considers Creek her friend and Branch has taken his place.
Add a photo to this gallery

Creek was one of Poppy's closet friends, to the point that when Chef attacks she tried much harder to save his life than the other members of The Snack Pack. Additionally, she couldn't accept he had been eaten by King Gristle Jr., and even stopped Branch from attacking him when Branch realized Creek sold them out. Moments later, when Creek confessed about it, Poppy tried to strangle him herself.

In the prequel book Follow Your Art, Creek was shown to be very supportive of Poppy, and even had a very close relationship to her. It was noted in the book that both Poppy and Harper found him attractive and in terms of their feelings towards him as a male Troll; they considered him "perfect" due to his attractiveness and personality.

Even though Creek returns in Trolls: The Beat Goes On!, it's clear that he's not among Poppy's closest friends anymore, instead being just another Troll in the village. This is also evidenced by her replacing him among her friends' photos.

Branch and Creek, similar to Branch and Poppy, are contrasting personalities. Creek is a foil for Branch being unlike him; he's also positive much like Poppy. However, Branch is brave and willing to risk his life for others, with some nudging from Poppy initially, whereas Creek is cowardly and into self-preservation.

Trolls: The Beat Goes On!

The other Trolls may have forgiven Creek, but Branch didn't and the two remain rivals throughout the series. Branch believes he's the only one who sees Creek for who he is, and the other Trolls put too much trust in him, allowing to manipulate them. Well until Branch decided to also forgive him by singing a song to apologies to him, when he didn't think he really reformed.

According to most of his official material he was popular among the female Trolls of Troll Village, which was referenced in Follow Your Art, when both Poppy and Harper felt he was "perfect". He was generally considered by the entire village as a good person.

In Trolls:The Beat Goes On!, it was noted that because of Creek being such an impressionable and valued member of Troll society in the past, he had even managed to have a week-long event named after him. This event is called "Creek Week", and continued despite the events of Trolls.

Creek appears in the Trolls movie after The Snack Pack have encountered Branch. Creek takes a point to mock Branch's negativity; this ends with Hug Time occurring and the group trapping Branch in a group hug. When Branch escapes, he tells Poppy that he hopes when the time comes and she's queen, her singing, dancing and hugging will save her as it's all she knows to do. As Branch leaves, Creek tells her to ignore Branch, as some folks just don't want to be happy.

He's next seen at Poppy's celebration of the 20 year anniversary of King Peppy's escape plan, which saved all the Trolls in the Troll Tree from the Bergens. He's seen launching glitterbombs using Satin and Chenille's conjoined hair as a catapult. As the party gets noisier and noisier, it manages to catch Chef's attention, who has been looking for the Trolls for 20 years since King Gristle Sr. fired her for letting the Trolls escape the Troll Tree.

Chef invades the party and takes the entirety of the Snack Pack, save Poppy herself, who's desperately trying to save Creek most of all during the attack.

The group is taken to Bergen Castle, where Chef convinces King Gristle Jr. to bring back the Bergen Troll-eating holiday Trollstice. As preparations begin, Gristle begins to doubt Chef's preparations, and in an attempt to convince him that everything is fine, Chef tries to get him to eat Creek. Gristle keeps finding excuses not to. Eventually, Chef stuffs Creek in his mouth and they leave the dining room. The entire event is witnessed by Poppy and Branch, who came to rescue the kidnapped Trolls.

Outside, Creek manages to survive from getting eaten and pleads for his life. He makes a deal with the Bergens; to save himself being eaten, he'll give them all the other Trolls.

When Gristle has his date with Bridget, disguised as "Lady Glittersparkles", Gristle reveals that Creek is alive. This causes Poppy, who was hiding with her friends in Bridget's hair, to attempt to rescue him. Their rescue plan fails, with The Snack Pack being recaptured, Branch as well this time. Creek reveals to Poppy that he sold the entire village out, much to her dismay. He takes Poppy's cowbell and helps Chef capture the entire Village by banging it to call the Trolls out of hiding.

The Trolls eventually save themselves, and the Bergens abandon the consumption of Trolls. The last scene of the movie has Creek and Chef being sent on their way, the pair stuck in a cooking pot. They're last when the pot stops on the top of a hill. Chef goes to reach over to eat Creek, only for the hill to turn out to be a hill monster. They then fall into its mouth.

Creek was designed to make Poppy question her positive attitude due to his own attitude. He was meant to make Poppy doubt herself by choosing self-perservation over the welfare of the other Trolls, and represents the dark side of being positive.

Creek replaced the deleted character Miss Guffin. Many of his traits are also reused from Cybil, who was a character intended to have a big role in the movie, and was also very Zen-like. In many concept arts, Creek had a gem, either as an amulet or as a "Good luck Gem" belly button gem. He also was going to be purple with orange hair that faded to blue, though went through a number of color changes. In most renditions, Creek was meant to be a "pretty-boy" or attractive Troll.[1]

Creek is the most positive, supportive, reassuring Troll in all of Troll Village, approaching everything with Zen like wisdom. He’s calm, collected and capable.

But being beloved by everyone sometimes has its drawbacks, and literally lands Creek in hot water.

He was unlockable in Trolls: Crazy Party Forest!.

In the game, he was a "Guru" Troll whose favorite activity was Yoga.

Creek received very little merchandise. While he had plush dolls and figurines in the Hasbro Miniature Figurines blind bags, most other figurines comes with batches of other Trolls rather then separately. This likely has more to do with his role in the Trolls movie and his perception making him less popular and thus less attractive as a character.

Retrieved from "https://trolls.fandom.com/wiki/Creek?oldid=50089"
Community content is available under CC-BY-SA unless otherwise noted.