Funk Trolls are a type of Trolls that appear in Trolls World Tour. Their leaders are the heads of The Funky Family, Queen Essence and King Quincy. They were the only other type of Troll to be represented in Trolls, since Cooper appeared in the movie.[1]

They have long necks and some are quadrupeds instead of bipeds like all other Trolls, individuals born quadrupedal usually have three toes on each foot instead of the four digits of all other Trolls. They tend to have less hair then most Trolls by default (Trolls can grow their hair longer at will) and often it doesn't stick up into the air; members often have their hair as wool-like dreads. Instead, their bodies are covered in Troll hair or fur. Like the Pop Trolls their skin is a soft felt-like texture. Their designs are loosely animal-based and make them quite distinct to other Troll tribes. Because of the patterns in their fur, these Trolls are the most colorful ones. They usually have at least 2 colors, with some having three or four different stripes. The majority of the Tribe are naked save accessories such as sunglasses, hats and jewelry, with King Quincy's cape being an exception.

Members of this tribe are among the tallest Trolls in Troll Kingdom, and adults tower over the other Trolls from other Tribes (the typical Troll from all other Tribes is approximately 6 inches in height). Only a few Trolls such as Biggie and Skyscraper compare to the height of the members of this Tribe.

Most Funk Trolls are randomly generated. Females can be picked out by their long eyelashes. Their fur is either randomly generated as long or short resembling a gown or dress, and has varying stripped patterns. The Funk Trolls have some of the highest amount of random generation variables.

Baby Funk Trolls are notably much smaller than adults, having shorter necks and legs, and bigger heads in proportion of their body. 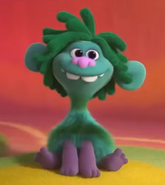 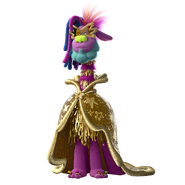 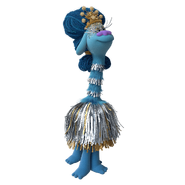 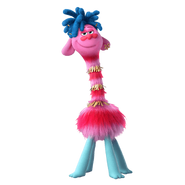 Cooper
Add a photo to this gallery

The Funk Trolls are lead by their royal family the "Funky Family". The royal family is in charge of keeping the general population safe and will lead the battle defence of their people as well as make decisions.

The Funk Trolls love Funk music. Their music is focused on bringing out a 'feel good' feeling even when times are rough. The Funk Trolls despise bland music and not fans of auto-tuning, they like their unique sounds. Their music generally focuses on creating unique sounds, it is a evolving music that has changed greatly over time to eclipse other genres such as soul and hip hop. This is how Prince D and Cooper ended up only half-funk, while Funk is their heritage, Prince D is half Hip hop and Cooper is half Pop, though the pair are identical twins. Both are capable of adding rap and their genre overlaps to the Funk style as a result.

The Funk Trolls dancing has adapted to fit with their body type. It usually involves a lot of footwork, with those having four feet taking advantage of having four feet over most Trolls two. They also move their neck and head a lot in conjunction with this and bend or swing it to the beat, which is another physical trait other Troll Tribes do not have. This means that they have some very unique dance moves at times compared to some of the other Tribes.

They're friendly and focus on love. Although when Poppy first met them, they were unwilling to ask for help from the Pop Trolls, believing like all Tribes, that differences separate everyone. But in their eyes, to deny their differences would be to deny the truth of who they are.

However, in spite of their normally passive nature, they're shown to be more than willing to fight to defend themselves should the need arise, as seen when the entire kingdom mobilized to fight against Barb and the Rock Trolls.

Similar to the Pop Trolls, the Funk Trolls are record keepers but like to record information on vinyl disks, recording history via song and cover art. As a result, their history keeping is much more accurate than the Pop Trolls' Scrapbooks, and they tend to tell history as it is. The Funk Trolls had been one of the Tribes able to identify Trolls from another Tribe having recognised both Pop and Rock Trolls.

The Funk Trolls are shown as the most advanced of the Troll Tribes. Their entire city moves through the sky and inside is a series of futuristic bright lights and other technology. They have the ability to manipulate gravity for example, with a projection that resembles bubbles that enshroud a fixed environment and smaller spherical bubbles go down to envelop persons to bring them up into the city. When Barb attacks, a flaw was picked out with the Funk Trolls' technology; it relies heavily on power. Riff pulled a plug and the entire city was left in darkness.

The Funk Trolls are the only Tribe not seen using Fauna in their every day lives, and are completely dependent on their technology.

They live in Vibe City and have an almost surreal and even science-fiction-esque landscape of mirrors, neon lights and disco ball like installations set against a often black background. Even the plants are strange compared to other parts of Troll Kingdom. This makes their home more like venturing to an alien world compared to all other Tribes.

The city itself roams a desert that is complete covered in sand, the fact the city moves around makes the Tribe the only nomadic Trolls.

Funk Trolls have some issues with camouflage compared to other Tribes such as Pop Trolls, due to their long neck and they can struggle to hide themselves. Cooper was captured by Chef in Trolls due to this very reason. They also tend not to rely on their hair as a form of defence so much either which hinders this ability as well.

The Pop trolls have been using Cooper's fur to make Hug-Time Bracelets, indicating Funk Troll fur has special properties instead.

They often have four legs instead of two, with the front legs able to be used as hands for brief periods of time, giving them the ability to do bipedal actions. All four of their feet can function as hands, though the frontal pair are more likely to be used for this process of handling things as they'll temporarily lift them up to do bipedal movements. The fact they have four feet, as well as their long necks, means that the members of this tribe can pull off dance moves that Trolls of other Tribes cannot, giving the Tribe some unique dance moves.

Thanks to their advanced technology they are shown to be well equipped for battle and very organized, they likely even would have been able to hold off the Rock Trolls attack had their power not been cut.

At some point in the past, the ancestors of the 6 Tribes created 6 Strings for each type of music, after a sound was made. As their name suggests, they were centred around "Funk Music" and hold the String related to their culture.

The current royal couple, King Quincy and Queen Essence, at some point of their lives got twin eggs. Unluckily, a bird stole one of their unborn sons, but fortunately this egg survived and hatched in Troll Village. This lost prince Cooper would later live among the Pop Trolls until the events of Trolls World Tour, which would bring about his reunion with his parents and his twin brother Prince D.

In the years after Cooper's abduction, the Funk Trolls worked together, and thanks to Queen Essence reached a point that they stopped fearing the return of the Pop Trolls. Meanwhile, Quincy looked for his lost son to the point he almost gave up by Trolls World Tour. Prince D also marked the start of the rise of Hip Hop among the Tribe, as during his teens he learnt how to remix and cut up his parents' music, adding this genre to the Tribes' Funk and soul focus.

The Funk Trolls soon had to face the conquest of the Rock trolls, which they failed to counter due to their technology being disabled. King Quincy and Queen Essence would be briefly brainwashed into Rock Zombies until the Guitar was shattered. They would ultimately be united with the other Tribes in the end after long-term isolation.

Their animal-like appearance is based on a Troll doll of a giraffe, one of a number of "Troll Animals" produced which included other animals such as horses, llamas and dogs. Since Cooper is the first member of the tribe to appear, most of the influences on this Tribe come from his earlier design.[2] Their animal-like appearance is an intended pun as Cooper was described as a literal "party animal". Originally their Troll origins were not given, Cooper himself was listed as a "Trollimal" in Trolls: Crazy Party Forest!, while in other media the family was called "Mystical Trolls".

As their name suggests, they're influenced by Funk music. Funk is a genre of music hat was popular in the 1960s, being defined at a similar time to Pop and Rock. It's a product of the influences of Jazz, Soul and RnB. It focuses mainly on the baseline, and such has a preference for songs that are set against a deep tone.

Of what little is seen so far, Queen Essence's bass guitar is actually a custom 3-string bass with the "G" note missing, which allows for faster fretting and more reliance on the bassline, and to match her husband. King Quincy himself is likely named after Quincy Jones, a famous songwriter, musician and singer who greatly influenced Funk, as well as other genres such as Soul and RnB.

The Funk Trolls had been of the most challenging Tribes to design as the creative team didn't know how "Funk" should look. It ended up being their favourite to design. They decided that the Tribe should not wear metallic custumes, but Funk should be in their DNA. Influence from NASA was also drawn, the Tribe was to have a urban feel.[3]

Retrieved from "https://trolls.fandom.com/wiki/Funk_Trolls?oldid=50924"
Community content is available under CC-BY-SA unless otherwise noted.