Puff of hair with nothing but feet

Fuzzling Trolls, also known simply as Fuzzlings, are a variant of Trolls whose name applies to Trolls like Fuzzbert, who serves as this family's archtype. These Trolls are only seen living among the Pop Trolls. Like the Glitter Trolls, the term hasn't been impacted by Trolls World Tour, and is one of the few families to be still referenced.

The term "fuzzling" itself is of unknown origin. The Top Trumps Trolls, which feature the earliest naming of Troll families is the oldest recording of the term "fuzzling". It is used in the Trolls: Crazy Party Forest! game, and has been used thereafter for all references to these type of Trolls. Fuzzbert was one of the several Fuzzlings named in the game. The Trolls: The Beat Goes On! series first uses the name in Fun Branch, where the Fuzzlings were repairing various pods.

They're essentially just a fluff of hair with two legs sticking out of the bottom, and nothing else. Due to their lack of a body, they're normally shorter than average Trolls. They make noises, but cannot speak and are otherwise silent. In Trolls World Tour, Fuzzbert sticked out a hand that high-fives Queen Poppy; this was a joke about Branch being unable to do so.

Along with Glitter Trolls, the Fuzzlings are among the easiest Trolls to identify.

Wim (toy only)
Add a photo to this gallery 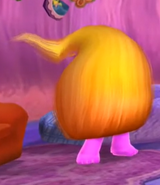 Tickles
Add a photo to this gallery

Name currently unknown
Add a photo to this gallery

They have the ability to store a lot of items in their hair, like large numbers of other Trolls. Promotional material also states that they lack the ability to talk, and are only capable of incomprehensible noises, hums and murmurs. Fuzzlings are considered the most mysterious of the Troll families by Troll standards.

Also, in The Imposter, Branch goes to shake hands with Fuzzbert. This was a trick so that he could tug Fuzzbert's hair while looking for an imposter Troll, only for Fuzzbert to pull Branch into his hair as a response. Once inside, he's approached by 3 other Fuzzlings who ask him in digital noise "Did you find the Imposter?", clearly annoyed that he pulled Fuzzbert's hair. They appear to be fully aware that there's an imposter among the Trolls, who's certainly not one among them. Branch then appears outside of another Fuzzling.

Retrieved from "https://trolls.fandom.com/wiki/Fuzzling_Trolls?oldid=52944"
Community content is available under CC-BY-SA unless otherwise noted.