Glitter Trolls are a natural variant of Trolls seen so far only among the Pop Trolls. Guy Diamond serves as the model for this family's main traits. Unlike most Troll families, the Glitter Trolls have been maintained since Trolls World Tour. They're the most developed of the Trolls-era families, with many references made to them.

A crowd with Glitter Trolls behind The Snack Pack in Trolls (Creek has one on either side of him, one of whom is Guy Diamond)

From Trolls: The Beat Goes On!. It should be easy to tell the Glitter Trolls apart from the normal Trolls, as well as the single Treasure Troll that was generated in this scene.

From Trolls World Tour. Legsly with a group of Trolls, including 3 Glitter Trolls.
Add a photo to this gallery

Trolls may be dashed in glitter, such as the few flicks of glitter on Queen Poppy's cheeks. However, these Trolls are easily identified by their completely glittery bodies as well as their metallic hair. They're one of only two families of Trolls that cannot be mistaken for another Troll family, the other being the Fuzzlings.

Their skin is one of the more unique-textured skins of the series. They don't have skin that is a light fuzz like normal Trolls have, such as Queen Poppy or Branch. Their skin texture was tweaked between the movies. In Trolls, they resembled a normal troll with glitter replacing the fuzz, making them look shinier. In Trolls World Tour, they instead have plastic-looking skin, with their glitter encased randomly in multiple skin layers; the uppermost one is semi-transparent. This allows them to look like they have glitter on more than just the surface of their skin. In Trolls: The Beat Goes On!, the glittery skin is created using a technique known as "unmoving plaid texture"; the texture is animated in loops and occasionally sparkles.

These Trolls tend to prefer to be completely naked, with exceptions such as Gia Grooves. In fact, it's revealed in Truth or Dare that just wearing pants is gross to these Trolls. Even though, Tiny Diamond on Twitter confirmed that they will wear suits - their birthday suits.[1]

As evidenced by Tiny Diamond also being a Glitter Troll, their glittery skin is also inheritable, and can transfer into other types of Trolls. Thus, while most Glitter Trolls are Pop Trolls, they can be other genres like Tiny's Hip hop.

The main difference in design between 3D Glitter Trolls and the 2D ones from Trolls: The Beat Goes On! is that the designs in the 2D animation are a lot more unique. In the movies, all Glitter Trolls reuse Guy Diamond's model with changed colors, except the inclusion of eyelashes to indicate a female.

Other Trolls also have glittery skin. Examples of such include the Classical Trolls (glitter being one of their racial traits) and Skyscraper. 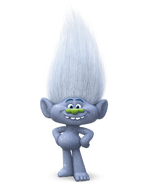 Gia Grooves, one of the few Glitter Trolls to regularly be fully clothed. 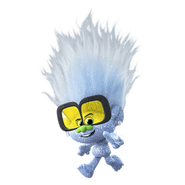 Tiny Diamond, the first not to be a Pop Troll

Archer Pastry, the disguise of Kaboom

Arabesque (toy only)
Add a photo to this gallery

Sunny
Add a photo to this gallery

Glitter Trolls are proud of their skin and can be quite vain. Here, three relax after having their skin buffed to bring out its shine.

A horror upon horrors for a Glitter Troll: losing their glitter.

Guy Diamond's pitch for Blank Day: a day where normal Trolls glitter like they do for a day.
Add a photo to this gallery

The Glitter Trolls are proud of their beautiful metallic sheen overall. Even Gia Grooves in Trolls: The Beat Goes On! was written to value her own vanity at times.

In the Trolls: The Beat Goes On! episode Glitter Loss, Guy Diamond loses his glittery sheen after a scrubber pod scrubs the glitter off of him; he's left as just a normal grey troll with metallic hair. The scrubber pods should, had Guy not interfered, just buffed his body to brighten his natural sheen. The glittery sheen of a Glitter Troll can be restored by an artifact known as The Fountain of Glitter. However, a Glitter Troll who becomes too full of themselves after bathing in it can shine dangerously bright, to the point that they set things on fire, resulting in them having to maintain a level of humbleness to keep a reasonable shine.

These Trolls fart glitter, which is strong enough to propel themselves forward, and it will fall off from time to time when they dance. They shine light off of their bodies and are essentially a walking disco ball. In Trolls, multiple Glitter Trolls hung from a ceiling together to produce even larger disco ball effects. 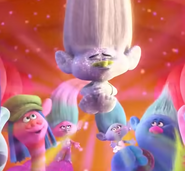 A single Glitter Troll (Guy Diamond) shining light off of himself and acting as a disco ball. 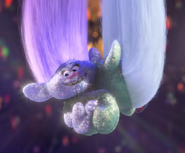 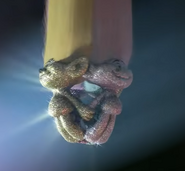 Retrieved from "https://trolls.fandom.com/wiki/Glitter_Trolls?oldid=52946"
Community content is available under CC-BY-SA unless otherwise noted.