Guru Trolls were a name family of Trolls that appeared in Trolls-era media. The basis of this family are Cybil and Creek, the latter of whom is absent in Trolls World Tour.

Since the release of Trolls World Tour, this term has been mostly abandoned, with all the family's members into falling into the category of "Pop Trolls".

While they appear to be like any other Troll in the Pop Troll Tribe, they tend to wear a more spiritual attire. 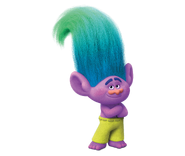 Creek
Add a photo to this gallery

Saffron
Add a photo to this gallery

Guru Trolls often claim spiritual enlightenment or wisdom. However, any media reference to this tends to imply that these are just claims the family makes, and they don't actually have any spiritual abilities.

For example, Cybil is supposed to be a psychic who predicts the future, but it is dubious on her talents. Creek is the only member who's shown to be a obvious fraud, as though he claims to be at one with the universe, he abandons this and turns cowardly when faced with danger.

Retrieved from "https://trolls.fandom.com/wiki/Guru_Trolls?oldid=52971"
Community content is available under CC-BY-SA unless otherwise noted.