King of the Techno trolls

Trollex is supporting character in Trolls World Tour. He is the fun-loving, but passive king of the Techno Trolls.

King Trollex is a Techno Troll, and he appears to have bio-luminescent neon colors with an aquatic biology, having fins instead of legs (the fins having pixel-like colors of pink, cyan, and blue) and gill-like ears. He has dark blue skin with neon green hair that resembles fiber optics held together in a purple topknot, blue, violet, red, orange, yellow, and green bands of color on both arms, pale green eyes with no whites and large, round black pupils, and a neon green mouth with yellow teeth. He also has pixelated freckles of lighter blue on his cheeks. He's usually seen (but not always) wearing pinkish-purple wireless headphones.

Like all Techno Trolls, he has a pixelated pink heart symbol on his chest and an unibrow. He's actually noticeably bigger than any member of his tribe who's made as a Random troll. His height is owed to having a longer body and much longer fins then the other Techno Trolls.

As a Rock Zombie, his body becomes a pale white color, his hair turns red and is held up in its topknot style by a spiked band, and his eyes glow red. He has a dark vest and now he's missing the pixelated heart symbol on his chest, as well as his glowing arms. He has a spiked band on each of his wrists, and his lower half is a more denim blue color with a lattice pattern across it. His ears also gradually turn black, with the right one having a hoop earring.

Same, from another shot showing the model's coloration without lighting effects
Add a photo to this gallery

King Trollex appears to be an exuberant and positively electric troll who loves his tribe's genre of Techno Music. He's beloved by his Techno Trolls and enjoys playing their music to bring them all together, proclaiming his idealization for family, love and music. He's shown to be a bit of a playful prankster; he purposely makes his Tribe wait for the drop of his song to hype it up, even disappearing and reappearing to lift up Coral Blush as he kept saying, "Wait for it". His delayed song drop was being frustrating to members like Bliss Marina.

But King Trollex did show himself to be brave when he went to confront Queen Barb by himself, showing that he's protective of his people, and he's willing to put himself at risk if it means keeping them safe. However, Trollex chose not put up a fight against Barb after she and her Rock Trolls displayed how dangerous they were, and because Trollex realized he and his people were in no position to resist. He values his tribe's music, but he values his tribe even more as he willingly gave up his tribe's String to Barb to protect his people, even though it clearly went against his heart.

He was despondent when it appeared his music had been destroyed forever, but he quickly cheered up when the Funky Family helped everyone realize that music came from the heart, as it always had. King Trollex agreed by adding music comes from one's experiences, and he joyfully embraced the notions of harmony and differences as he sang Just Sing with all the other troll leaders.

He has most normal Troll abilities, as well as the abilities of his Tribe.

When dancing, he often goes through multiple spots in a quick and sudden pattern.

As king of the Techno Trolls, it was his sworn duty to protect his music, including the blue string of Techno, until the strings were destroyed and the Trolls reunificated as a species.

Trollex and his tribe were the first to be targeted by Queen Barb when they were hosting a rave party. Initially, he refused to cave in and wanted to protect his music, but Barb used her shrilling rock music with the other Rock Trolls and destroyed Techno Reef. Realizing how dangerous the Rock Trolls were and because they were in no position to resist, King Trollex sadly caved in to Barb's demand and relinquished his tribe's String in order to protect his people. He and his entire tribe were abducted by Barb's Rock trolls afterwards.

After he and his Tribe were kidnapped and taken to Volcano Rock City, Trollex (along with the other troll leaders) was converted into a rock zombie by Barb using the Ultimate Power Chord.

Queen Poppy, however, managed to avoid the brainwashing of the Chord and got the guitar from Barb by fooling her. To make sure Barb couldn't abuse the powers of the Six Strings any further, Poppy smashed the guitar, and King Trollex, alongside the other leaders and Branch, was returned to normal. But the destruction of the Strings left everyone with a profound sense of loss as Barb blamed Poppy for destroying all music. Although everyone was initially heartbroken by this apparent loss, Cooper and Darnell began to make music, and it was Queen Essence who realized aloud for all to hear that while their music started with the Strings, it truly came from within themselves, which is something that can never be taken away. Then King Trollex agreed by declaring music comes from their experiences, with Delta Dawn also adding that it comes from their lives, and Essence from their culture. Then all the Trolls sang together, inspiring harmony between them and restoring their true colors.

Trollex, along with the other troll leaders, later visited Pop Village to celebrate the harmony of the Tribes during the song Don't Slack.

From DreamWorks Website: King Trollex is portrayed by Grammy Award winner Ramos, whose work onstage includes his pivotal role as one of the original cast of Broadway’s Hamilton. "Anthony is an incredible talent," raves producer Gina Shay. "He has a wonderful singing voice and brings heart and comedy to the character of Trollex, the Techno king. He is one of the greatest additions we made to the Trolls cast this time around."[1]

Some renders featured him with pink eyes, a blue mouth and topknot, and a glow-hoop around his neck.[2]

From his Trolls World Tour promo:

Trollex is the confident, kind, and upbeat leader of the EDM-loving Techno Trolls, a tribe of Troll mermaids who live underwater in a LED-lit digital fortress. The Techno Trolls value peace, love and harmony above all else, and their hearts all beat in sync at a rhythmic 128 beat-per-minute. As their leader, King Trollex is tasked with keeping everyone partying safely, and of course – the most important royal duty of them all – dropping the beat.

As their leader, King Trollex is tasked with keeping everyone partying safely, and of course—the most important royal duty of them all—dropping the beat. But when Barb and her band of hard rockers roll into town, she presents Trollex with an impossible dilemma: "Your people, or your string."

King Trollex had received several figurines in merchandise. Some of these use design elements from his early renders. 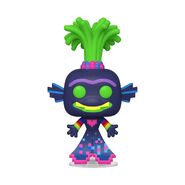 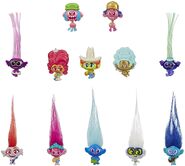 Retrieved from "https://trolls.fandom.com/wiki/King_Trollex?oldid=54905"
Community content is available under CC-BY-SA unless otherwise noted.