Maker Trolls were a family of Trolls that existed in Trolls-era media. The basis of this family were Harper, Maddy, Satin and Chenille.

This term has been abandoned since Trolls World Tour, because Trolls are now mostly identified by their Tribe rather than their family.

These Trolls tend to dress to reflect their interests. For example, Harper has a apron and paint on her body, and Maddy's hair is fancy-looking compared to all other Pop Trolls. 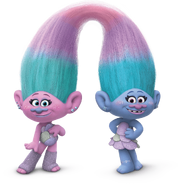 Uncle Ron Sr.
Add a photo to this gallery

Uncle Ron Jr.
Add a photo to this gallery

Though other Trolls could have talents in certain artistic areas, all Maker Trolls have artistic talents which they were born with, becoming a second nature to them. For example, Satin and Chenille dedicate their lives to fashion and Harper to painting. Their natural talents in crafts is similar to how the Sporty Trolls excel at sports.

Retrieved from "https://trolls.fandom.com/wiki/Maker_Trolls?oldid=52950"
Community content is available under CC-BY-SA unless otherwise noted.