Mandy Sparkledust is a minor character from Trolls. She is voiced by Kandee Johnson.

Mandy Sparkledust is the maker troll who designs and repairs all of Troll Town’s treasures – including the Hug Time friendship bracelets.

Poppy being passed in front of Mandy, behind her is Aspen Heitz 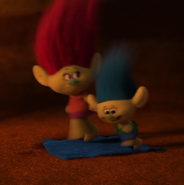 Retrieved from "https://trolls.fandom.com/wiki/Mandy_Sparkledust?oldid=31285"
Community content is available under CC-BY-SA unless otherwise noted.