Rainbow Trolls was a term used for certain Pop Trolls in Trolls-era media. The family was poorly explained in comparison to all other Troll families in that era. The basis of this families archtype are Queen Poppy and Branch, as well as their respective relatives. The family are a group of Trolls that appear "normal" most of the time, but have hidden colors that only appear when they're showing their "True Colors". This is first demonstrated by Branch in Trolls, where he gained a bright, vivid blue and purple coloration in the True Colors song.

Their family was first named in Top Trumps Trolls, and are also featured in Trolls: Crazy Party Forest! and other media. This term has been mostly abandoned since Trolls World Tour.

The Rainbow Trolls are brightly colored, but this does not make them stand out from the other members of the Pop Troll tribe at all, as they also have bright colors. 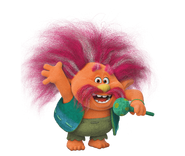 Moxie Dewdrop
Add a photo to this gallery

Aria
Add a photo to this gallery

Rainbow Trolls have hidden colors that take great effort to bring out, and is the origin of their family's name. Otherwise, they'll appear to be like any other Troll.

Acorrding to Trolls, Branch's True Colors are vivid blue hair and skin. His hair had also grown to reflect he was now showing his true self. Merchandise in the Trolls era has featured Poppy's True Colors as having a rainbow coloration, which was later seen in Trolls World Tour, Poppy's True Colours are blue, purple and yellow which show up as stripes in her hair.

No other Rainbow Troll has ever been featured with their True Colours except Poppy and Branch.

The dolls in the "Rainbow Troll" series were notable for their hair being multi-colored or "rainbow" hair; Poppy so far is the only one in the Trolls franchise to ever be shown with rainbow hair, having such hair in the ending of Trolls World Tour. The original Rainbow family has also been referenced by Hasbro and Funko recreations of the original Rainbow Troll series. The Rainbow Troll series was one of the most popular and successful series of the 1990s Russ Trolls. 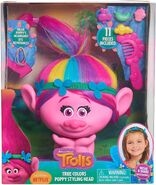 In the Trolls era, a doll of Poppy was featured with her showing her "True Colors". This isn't considered official since it was produced for merchandise purposes. Hasbro had also featured other dolls with Rainbow hair that weren't labelled as their "True Colors". 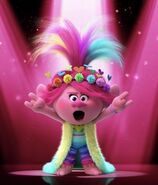 Poppy with rainbow hair from Trolls World Tour, the only time any character of the "Rainbow" family bared similarities to the series they were based on.

The classic Rainbow Trolls as referenced in the Trolls: The Beat Goes On! episode Wormhole.
Add a photo to this gallery

Retrieved from "https://trolls.fandom.com/wiki/Rainbow_Trolls?oldid=52954"
Community content is available under CC-BY-SA unless otherwise noted.