A screenshot of Tresillo, Marimba and Tambora, the only known members of the subculture.

Reggaeton Trolls are the subculture of which Tresillo, Marimba and Tambora belong with. These three are the only known Reggaeton Trolls. It is unknown how they are related to each other or if other Reggaeton Trolls existed before them, or currently besides them.

Due to there being only three members, not much can be said about how Reggaeton Trolls generally look like. Even though, the known members are very similar to each other, not wearing any clothes and only having hairbands and earrings. They have markings across their bodies and in their hair, which are textured to look like a matte latex and cover the otherwise lightly fuzzy texture that most Trolls have in 3D animation. Their hair is dreadlocked and has a wooly appearance, similar to the Funk Trolls. 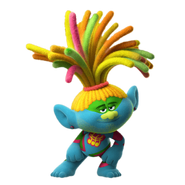 Tambora
Add a photo to this gallery

It is difficult to judge the subtribe due to their lack of numbers. The only three Reggaeton Trolls seen so far are laid-back but sneaky. Rather than catching Branch on their own, they let The K-Pop Gang do the work and swooped in afterwards to try and grab him for themselves.

The Reggaeton Trolls were at some point born from within the existing Tribes as a random variant or mutation on their Tribes genre of music, as part of the "in between" category of music. Their origin Tribe are currently unknown but this lead to a new type of Troll coming into existence.

The trio are first appear in the Trolls World Tour movie when Queen Poppy sends an invite to Queen Barb containing a Glitter Bomb that explodes in her face. In anger Barb summoned Tresillo, along with other Bounty Hunters were summoned to track down and capture Queen Poppy. The reward is their own domain and to be spared from Barb's conversion to Rock Music, though the land she promises is rather tiny.

The K-Pop Gang find Branch instead and capture him, demanding they be lead to Poppy by him. This is interrupted by Tresillo, who wants Branch for himself to save his own music and both sides have a dance off. Out of respect for each others talents, the eight trolls agree to split Branch, until Branch proposes an alternative. They go with him to Barb's victory Rock concert.

When the Strings are destroyed, they too lost their music. But soon the Trolls all regained their music thanks to the Trolls realizing they no longer needed them and the music they love comes now from within.

Reggaeton is a jamaican-inspired music genre that originated in the 1990s, and became popular in the 21st century. It originates from Puerto Rico and is a Spanish-speaking style of Caribbean music. Despite its name, it is mostly considered a variant of Hip hop, and not Reggae. Reggaeton music uses both rapping and singing results, and often contains heavily sexual and violent themes because of the lack of parental advisory requirements in the Caribbean.

Retrieved from "https://trolls.fandom.com/wiki/Reggaeton_Trolls?oldid=51442"
Community content is available under CC-BY-SA unless otherwise noted.