Rock trolls, or Hard Rock Trolls, are a Tribe of trolls who appear in Trolls World Tour. Their current leader is Queen Barb. Their former leader is King Thrash.

The Rock Trolls resemble the Pop trolls the most, though they have more fierce looks. Their clothing is often tattered, and they commonly have piercings and heavy black makeup. Most Rock trolls favor dark colors such as grey, dull blue and black, as well as the occasional white and bright red. Their noses are usually arrowhead-shaped, and their ears have a sharper point, which is a defining trait of their tribe. Their hair itself often sticks straight up like the Pop Trolls' hair does, but the ends fall down, giving it a wilder look, with many of them also having it styled into spiked peaks. The skin tones of the Rock trolls are muddy-colored; for example, Barb's skin is a muddy red, which sometimes looks purple. These tones are similar to Branch's, though this is purely coincidental as Branch's original skin color was cyan.

Most of the Rock Trolls are randomly generated. They share the same body types with the Pop trolls. Females are identified only by their eyelashes, which look like they have thick mascara and heavy eyeliner. Also females tend to have the same pair of earrings on their left ear, while males tend to lack any kind of earrings at all. Males often have a nose piercing instead. Both males and females can have charcoal-colored, smokey-looking eye shadow, though females tend to always have it and males have less of it when they do. Their hair is one of several designs that have been picked out randomly for each model, and can be one of about 4 colors: red, grey, black and white. Their clothing is also randomly generated.

A large crowd of Rock Trolls

A rock troll adult (left) and a baby (right) 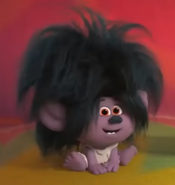 Another Rock Troll youngster
Add a photo to this gallery 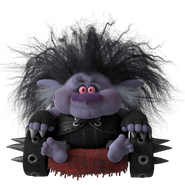 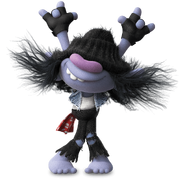 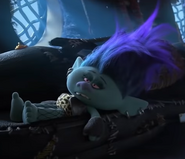 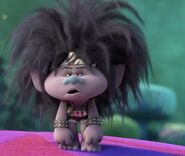 Sid Fret
Add a photo to this gallery 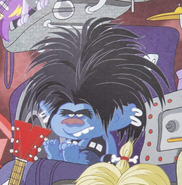 Some Trolls were temporary made into "Rock Zombies" and gained a Rock-Troll design. 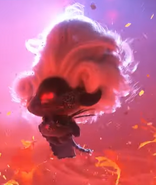 Rock Clampers
Add a photo to this gallery

The Rock Trolls have a King or Queen in charge. The Rock Trolls leader has to be the most "bad-ass" rocker around. A heir will take the position of leadership if the older King becomes unable to lead. However, respect is not lost for the older monarch. They favor strong leaders over weaker ones.

Compared to other Tribes, individuals may have trouble speaking out against their leaders as the general population tends to follow whatever direction their leader takes the tribe in. With the exception of the temper of their current Queen Barb, the majority of the Rock Trolls don't seem bothered by her presence throughout the movie with exceptions and just is expected to lead them in music. Barb tells Queen Poppy about the tendency to be told only what she wants to hear and that there is a lot of pressure on her.

The Rock Trolls like Rock music, their lives are centered around Rock concerts. The Rock Trolls' music contains lyrics that carry meaning, and use a sense of energy and power.

They have strong opinions on the music of the other Tribes. They don't like music that is boring with no lyrics at all like the Classical Trolls, has meaningless and pointless lyrics like Pop music or is just random noises like the Techno Trolls' music. They seemed to dislike Pop music the most, evidenced by Barb labelling it as "the worst of all".

Rock Troll music involves a lot of headbanging and fist raising, usually in the horns style. It will also involve jumping on the spot, but generally doesn't seem to include a lot of varied movement overall.

When speaking of the Rock Trolls, King Peppy has trouble describing them in a good light in the trailers. Queen Poppy describes Barb as using her power "for evil". However, the Rock Trolls aren't actually evil, and simply identify as who they are - Rock Trolls. Rock Trolls are the most dedicated Trolls to their genre of music and follow their favorite genre to a zeal. Their reaction to Poppy and the Pop Trolls is based on the past, when the Pop Trolls had been themselves evil; this makes the Tribe guilty of ancestor shaming.[1]

Their leaders express a desire to rid the world of other Troll tribes' music; this forms the plot of Trolls World Tour, as the Rock Trolls seek out the 6 Strings. They're fierce and appear quite frightening compared to other Trolls both in appearance and aggression. They have far less tolerance for other Tribes for some reason, and want the world only filled with Rock Trolls and their music. Barb's goal in Trolls World Tour was to cause harmony among the 6 Tribes, simply by uniting them all under 1 genre of music, their music so every Troll looked the same and liked the same things. Her fellow Rock Trolls supported her in this endeavor.

In scenes, the Rock Trolls can be seen pushing carts when The Snack Pack are sneaking among their ranks. They appear to be somewhat industrious; many of their buildings are made of hard metal, in comparison to other Troll Tribes, with some things appearing almost punk-like. Despite this, they're also some of the laziest Trolls, and are seen just lazing around at times. They barely seem to put much effort into doing anything at all.

It's apparent by their information on other Trolls that they know exactly who everyone is. The means of Rock Troll information retrieval and record keeping is currently unknown. Their reaction to Poppy and the Pop Trolls is based on the past when the Pop Trolls had been themselves evil, with the Rock Trolls remembering them in a bias light. Barb was expecting Queen Poppy to appear more opposing based on how in the past Pop Trolls had been a threat to everyone else as she had worried about them. When the two Queens finally meet, Barb simply belittles and mocks Poppy for not living up to the reputation the Pop Trolls had earned from the past.[1]

The Rock Trolls have access to, and use, electricity powered things such as speakers and guitars. However, they also use fauna such as the Pop Trolls do for things like travel and sending messages as exampled by Barb's pet Debbie. In the Trolls World Tour movie they use Angler Bus creatures for transport, this is their equivalent of the Caterbus creature Pop Trolls use for transport instead.

They live in a volcanic area that is harsh and tough as they are, called Volcano Rock City. Their leader Barb resides in a fortress.

They are seen using packaged goods like Carol's can of spray cheese and King Thrash's 'Fibre' carton drink.

The Rock Trolls are shown to have a high tolerance to heat, able to live around lava; one even jumps into a pool of it with no ill effects at the end of the movie. He finds it difficult to get out again as he began to slowly sink, noting "erm... This is a little hot".

The Rock Trolls' music and aggressive tendency results in them being the most offensive of the Tribes. For the Techno Trolls, a more passive Tribe, the Rock Tribe simply walked over them as putting up no defense is a mistake. Yet even if the other Trolls put up a defense this wasn't certain to work either as due to their aggression, a group of Hard Rockers can easily send the large orchestra of the Classical trolls away. The Rock Trolls beat the tough Country Trolls despite their physical prowess and the technology-reliant Funk trolls, although both victories weren't seen onscreen. Nor was the fall of Pop Village, but it nonetheless fell to the Rock Trolls. The only tactic that seemed to have worked against the Rock Trolls was "run and hide", which spared certain members of The Snack Pack, but most Pop Trolls were still taken.

It's implied by how easily The Snack Pack fooled Sid Fret and another Troll with outfits that were obviously mismatched to the Hard Rock appearance, as well as their lyrics being incorrect for the Tribes' style, that the typical Rock Troll isn't that intelligent.

At some point in the past, the ancestors of the 6 Tribes created 6 Strings for each type of music after one of them made a sound. As their name suggests, they were centered around Rock music and they held the String of Rock song. However, the Rock Tribe and the other Tribes went on separate ways after having an argument thanks to the Pop Troll elder's selfishness. The Pop Trolls attempted to keep all music to themselves and prevented the other Trolls having their music. The Tribes grabbed their strings and ran away, each vowing never to meet again with the others, isolating themselves in the process.

At some point, King Thrash, their ruler and the King of Rock, handed over his crown to his daughter Barb and thus she became Queen of Rock just before the events of Trolls World Tour.

By Trolls World Tour, they had set their eyes on the rest of the Troll Kingdom, with Barb aiming to get all Strings and uniting the Trolls under one single music - their music. Thus, they begin an event called the "Rock World Tour".

During this time, they gathered all Strings and all Trolls of each Tribe and took them to Volcano Rock City and put them in an arena. Barb would convert everyone who wasn't a Rock Troll into a Rock Zombie. She almost succeeded in doing so, but her plan backfired thanks to Queen Poppy. The Trolls temporary lost their music when the Strings were destroyed, but all Trolls, including Rock Trolls, realized they could draw music now from themselves. The Rock Trolls are currently united with the other Troll Tribes once more as a united nation again.

The Rock Trolls, as their name suggests, are into Rock music. Originally, Rock was identified alongside "Pop" music and was included alongside it as a result. Over time the two developed into their own genres of music. It originated from the genre "Rock 'n' Roll" and spun off into many sub-genres including punk and heavy metal. The rock subgenres that the Tribe prefer the most are Hard Rock and Heavy Metal. They show a lot of influence from British rock culture as well.

King Thrash gets his own name from Thrash metal, while his daughter Queen Barb draws elements from Punk Rock. Barb's habit of sneering when she smiles is also a nod to the infamous "Elvis Sneer" that Elvis Presley became famous for making.

Retrieved from "https://trolls.fandom.com/wiki/Rock_trolls?oldid=32805"
Community content is available under CC-BY-SA unless otherwise noted.