Each other (twin sisters)

Satin and Chenille are supporting characters in Trolls, and has appeared throughout the series ever since. They're a pair of identical twins connected by the hair.

As shown in scrapbook cutaways, they're intended to look like they're wearing the same dress, except one of them is wearing it upside down. The twins are mostly similar to each other, except that they have different skin colors and outfits:

The twins' hair is joined together, and has different colors that flow from blue, then to purple, and finally to pink.

Being two individuals who are conjoined together, the two tend to rarely agree on anything.

Their personality isn't really explored in Trolls, but in Trolls: The Beat Goes On!, much detail is revealed. Usually Satin will say something, only for Chenille to criticize it later.

When one sister wants to do something, they have to negotiate with the other even if that twin doesn't want to do the activity. Chenille also tends to act like her sister is a anchor and will often volunteer her for things they both have to do. Chenille tends to try and be the dominant twin of the two, leaving Satin to cooperate with her and usually give in to her demands.

Despite having disagreements, they still care for each other, especially since Satin sacrifices a lot for Chenille.

Nova Swift accepts their Internship because of the honesty they showed towards her. She know they try their best and do want more glamorous work, she has them do a lot of tedious tasks to prepare them for her more fabulous tasks she has prepared for them. The twins have their limits and she understands that.

Gia mentions in Vega Swift that the twins often help her in fashion emergencies. Thus, she didn't mind helping them out as a returning favor by looking after Nova Swift's baby cousin Vega Swift.

Satin befriends Ripley during a speed friend event. Chenille is against the idea but realizes that the one who takes care of her is Satin. Chenille realizes that Satin usually gives into what she wants so occasionally she has to give the same back, thus comes to terms that their life may get a bit exciting with Ripley around.

They have most normal Troll abilities. Their conjoined twin hair can be used as a catapult. Their hair also allows one twin to toss the other and grab things. Both of these traits were shown in Trolls. They can temporarily split their hair, which was shown when they formed the wig for Bridget, so she could maintain her alias "Lady Glittersparkles". But their hair will join up again when they're done.

When panicked, a running gag for them is that they try to run in opposite directions, forgetting they're attached to each other. So at times, being joined together results in them having to cooperate with each other. It gives them unique abilities other Trolls lack, but at the cost of the two having to deal with never being able to work alone or face getting nowhere. In Sibling Quibbling, Branch suggests about cutting their hair and thus ending their conjoined situation, but it becomes apparent by the twins and Poppy that it's a comment made out of ignorance on Branch's part. Also in the episode and the earlier episode The Giver, it was shown when one twin is ill this doesn't mean the other will fall ill also. This results in the healthy twin having to look after her sister, as well as being restricted to what they can do while their twin recovers due to being unable to leave her behind.

The pair are known as "The Fashion Twins", and dedicate their life to making clothes better. They often give tips to other Trolls when they need a fashion emergency. They often make outfits for their friends. They begun a internship with Nova Swift in The Interns, having already been noticed by her in Model Behavior. Nova likes their fashion for its ferocious nature. The two have a habit of disagreeing on clothes they make which leads to one twin wanting to add or subject a piece from the item. Their arguments often lead to an item that they both like in the end, plus the recipitor of the item.

The pair usually perform in a duet, with their vocals harmonizing with each other.

Their dancing is much the same. It's seen in Trolls that they often toss each other while dancing to music.

The twins were born attached to each other making them different to all other Trolls in Troll Village.

The Twins at some point became close friends of Princess Poppy and joined the ranks of The Snack Pack. They celebrated their freedom from the Bergens like any other Troll for 20 years. Poppy was set to host her 20 year anniversary of their peoples' freedom from the Bergens, but when morning song was over Branch sarcastically applauded the Trolls for their loud music. He pointed out the party Poppy planned will only attract the attention of the Bergens, like the rest of Poppy's friends Satin and Chenille didn't take Branch's warnings seriously as they hadn't seen one in 20 years.

The party goes off and the twins attend it along with the rest of the village, with only Branch failing to attend. The party is the biggest, the loudest and the craziest party ever and like all of the village the twins enjoyed it. Then after a fireworks display, Chef attacks the Trolls and starts to grab them. The twins try to flee, but their conjoined hair makes it easy for Chef to grab them.

They're taken to Bergen Castle at Bergen Town by Chef and kept in a cage. The group witnesses Creek being eaten after Chef tries to force-feed the Bergen King King Gristle Jr. Chef then hands the cage to Bridget to look after.

Poppy and Branch rescue the group, who end up being stored in Bridget's room. After Bridget tries to recapture them, the trolls come to an agreement. They help Bridget get a date with Gristle, and she helps them to get Creek, as Poppy can't accept that Creek is gone.

The group invents a alter-ego for Bridget called "Lady Glittersparkles". They land her a date with Gristle. After finding out Creek is indeed alive, they attempt to rescue him. Their attempts end in confusion as the group is recaptured, now including Branch and Poppy. Creek reveals he has sold out the entire Troll Village to save himself.

The entire Troll population is thrown into a pot, after seeing Poppy turn grey, Satin and Chenille both turn grey as well, as the entire village gives up hope and lose their colors. Branch starts to sing which restores color and hope to Poppy and in turn the entire village. Bridget frees the Trolls and sacrifices herself by going to the Bergens with an empty pot.

Poppy, not wanting to see Bridget ruin her life, goes back with the group to save her. They recreate the wig of Lady Glittersparkles and show Gristle who his love interest actually is. Trollstice is cancelled and the Trolls show the Bergens how they can be happy without eating them.

The pair are part of the team that jumps out and startles Branch in his bunker when Poppy gets him on board her plan. The twins are on custom duty during Poppy's presentation to Gristle and Bridget.

Sometime after Poppy left Pop Village along with Branch and Biggie, the Rock trolls attacked the village. Though they took everyone else, Legsly, Smidge, Guy Diamond, Tiny Diamond, Satin and Chenille managed to avoid capture. Biggie returns to the village and feels guilty, as he had abandoned Poppy on her mission due to him getting scared. The group dresses up and tries to infiltrate the Volcano Rock City to rescue Poppy, though they almost get caught because Legsly didn't remove her anklet.

The group manages to convince a couple of Rock Trolls (one of them being Sid Fret) that they too are hard rockers, but they end up on stage with Queen Barb, unable to do anything to help at all.

They witnessed Barb Turning Branch into a Rock Zombie and then the Troll Tribe leaders of the Funk trolls, Country trolls, Techno trolls and Classical trolls also being transformed. When Barb turns her guitar on Poppy, however, she manages to resist the effects of the Ultimate Power Cord by putting gumdrops in her ears.

Poppy smashes the Guitar to stop Barb, but destroys all music in the process. The Trolls turn grey as they lose their music. This doesn't last long as the Trolls realize they can make music without the Strings now.

The twins went through a number of concept design ideas, many of which are featured in The Art of the Trolls.

As featured in the "Extras" section.

One of the rejected concepts from the DVD extras of Trolls

From The Art of the Trolls, design concept contrast image
Add a photo to this gallery

Satin and Chenille, or “The Fashion Twins”, are the most fashion-forward members of the Snack Pack, and their fashion knowledge is extensive, covering everything from haute couture runways to the latest street fashions. They’re also conjoined twins—connected in a loop by their brightly colored hair!

Satin and Chenille are instrumental in putting together all of Poppy’s various dresses and outfits.

Satin and Chenille are, literally, joined at the tuft. Conjoined hair-twins, they use their extraordinary powers of fashion to save the day. Fun fact: They're the hardest of ALL Trolls to render.

Most merchandise separates the twins. It's very rare to find toys which feature them joined together. 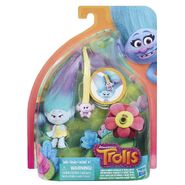 It's very rare for the sisters to be sold together,... 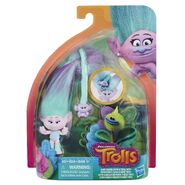 ...thus the two are often broken up.

There are exceptions when they're sold together.
Add a photo to this gallery

Retrieved from "https://trolls.fandom.com/wiki/Satin_and_Chenille?oldid=50155"
Community content is available under CC-BY-SA unless otherwise noted.