Techno trolls are a race of trolls who appear in Trolls World Tour. The leader of this aquatic Tribe is King Trollex.

These trolls are quite distinct from the other Tribes.

They have dark bodies covered in bright, bioluminescence neon colors, and a beating heart symbol on their chest. Their hair resembles fibre optic threads. They have fins for feet and their ears are gill-like. They're the only tribe whose nose has no definition, if they have one. They tend to have an unibrow across their forehead, and their teeth are designed to look like the bars on a music visualizer. Their entire body glows brightly. When not in water, they use their fins as feet to stand on and their hair becomes limp. None of them were seen wearing clothes, and they're therefore one of the Tribes to be normally naked.

Most Techno Trolls are randomly generated, and few have unique designs. What tends to change in these generic designs is just their color. Females are identifiable by their eyelashes, which vary in color, whereas with other Tribes they're usually just black. Some individuals also have patches of color around their eyes. In scenes with the random design generations, they're grouped mostly by color; i.e. all red Techno Trolls are in one large group, yellows together in another. Random Techno Trolls are typically smaller then non-random ones, save Coral Blush who is a baby.

Baby members of this tribe have a single fin rather than it being parted into two, and have a single hair strand. They're much smaller then adults.

Blue and green techno trolls in the background

Coral and a Classical troll baby for comparisons

A group of techno trolls 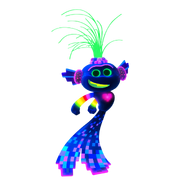 Coral Blush with his parents

Bliss Marina
Add a photo to this gallery

They have a King who is in charge of leading parties and generally keeping up the good vibes of their people.

Their music tends to be simple sample mixing and loops they focus on creating a good vibe. Techno Troll dancing generally involves them jumping to the beat of the music.

The Trolls gather into large crowds to jump together in synchronization, and form waves of movement that flow with the rhythm of the music, the jumping causing them to act like a music visualizer. They'll also do quick, sudden movements with their head and hands. They tend to not use their lower body because of the lack of legs. Their fins and hair are allowed to flow freely to the movement.

Queen Barb criticizes their music as not being real, listing it just as "bleeps and bloops". In Trolls World Tour: The Junior Novelization, their vocals were described as computer-like when they sang, making them sound cold and mechanical.

They seem to have massive Raves, resembling the Pop Trolls' love of partying. They're seen in teasers getting incredibly excited over King Trollex dropping a new track.

The Techno Trolls are brave, but passive. Though Trollex bravely stood alone against Barb, he surrendered after Barb and her Rock trolls displayed how dangerous they are by damaging Techno Reef.

Baby Techno Trolls don't seem to hide in their parents' hair when scared.

The Tribe is isolated, while Queen Barb identified him, King Trollex was unable to identify her and her Rock Trolls. They do not seem to have kept up their record keeping of the other Tribes at all as a result.

The Techno Trolls use LEDs and have a more digital-age level of technology, making them one of the more advanced cultures.

Some fish are seen voicing Trollex's "One more time!" song, so the Tribe still uses some creatures for certain activities.

The Techno Trolls' world is one of living, neon colors against a dark oceanic floor. They're playful and carefree, and have a similar attitude to life as the Pop Trolls (both living for peace, love and harmony). They live in Techno Reef. Their ruler King Trollex resides in a LED castle.

They are adapted for life underwater and have fins instead of feet allowing them to swim very quickly. It is shown in concept art that out of water Trollex floats in the air.[1] Techno Trolls can also float in air as well as breathe air and water, and they're able to stand and even walk on their fins. Some members were seen blowing heart-shaped bubbles. They don't seem to have the same hair abilities as other Tribes, since outside of water their hair is mostly limp. Also, their babies don't appear to rely on adults' hair as a hiding place when frightened.

Techno Trolls seem to be completely passive, as they made no attempt to fight back when the Rock Trolls came.

The ancestors of the Trolls create 6 Strings based on 6 genres of music, the "Techno Trolls" based on their name held the string of "Techno". The Techno Trolls partied with the other Tribes until the Pop Trolls stole the Strings. This lead to the Techno Trolls retrieving their String and like the rest of the Tribes, running away with it and isolating themselves from all other Tribes.

The Techno Trolls settled deep among the ocean floor away from the other Trolls on the land.

They were conquered easily by Queen Barb and her Rock trolls during the events of Trolls World Tour. Members of the tribe were rounded up and taken to Volcano Rock City where Barb intended to convert them all to Rock Zombies. This failed when Queen Poppy, Queen of the Pop trolls managed to find a way to resist the power of the Strings which were being used to convert everyone to Rock.

The Strings were destroyed by Queen Poppy and all music was temporary lost. The Trolls discovered they do not need the strings anymore to make music. At the end of Trolls World Tour the Techno Trolls are now living in harmony with the other Tribes once again.

The Techno Trolls are inspired by the Electronic music genre, and named after its subgenre of Techno. Electronic music evolved from use of synthesizers and modern technology. It appeared in the mid-20th century, but didn't gain traction until the 1980s, being the youngest genre of the 6 Tribes as a result. Known for its repetition of beats, this type of music heavily relies on non-traditional means of making sounds, even ones that are unique and inorganic.

The choice of bright colors refer to the neon colors that influential artists such as Daft Punk reference, as well as the "rave culture" habit of using glowsticks in darkened halls, which is often a setup for many EDM concerts. Their bodies have a number of pixelated details on their body, referencing the digital or computer-based nature of the way most modern Electronic music is made, such as the 8-bit beating heart design they all have on their chests.

They appear to be loosely based on Merfolks, like the mythical inspirations of other Troll tribes. The LEGO merchandise for the movie also includes a figurine of a Techno Troll as a "Mermaid".[2]

Retrieved from "https://trolls.fandom.com/wiki/Techno_trolls?oldid=33017"
Community content is available under CC-BY-SA unless otherwise noted.