The Funky Family is the name of the royal family of the Funk Trolls, who are in turn the rulers of Vibe City. While their first member is seen in Trolls, the family wasn't fully introduced until Trolls World Tour.

The Funk Trolls are led by the Funky Family. They consist of a father (King Quincy), a mother (Queen Essence) and their 2 sons (Prince Darnell and Prince Cooper). The family are regal and friendly, appearing as the most traditional "nuclear family" unit in the Trolls franchise. The Funky Family is generally friendly and open minded towards other Trolls and return respect to others. But they were well aware of the "us versus them" mentality of the six Troll Tribes and they themselves preferred to hold onto their Funk Troll identity rather than combining it with the music of others.

While Quincy and Essence are the traditional Funk music Trolls that love Funk and Soul, their twins are only half-Funk. Darnell developed into a half-Hip Hop Troll after experimenting with his parents' music, while Cooper was half-Pop due to his time spent with the Pop Trolls. 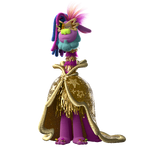 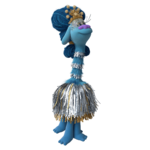 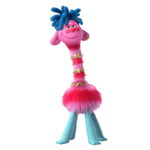 Prince Cooper
Add a photo to this gallery

At one point, King Quincy married Essence, and the two settled down together to rule over their people and protect their String. The pair became expecting parents of twin eggs. One day, as Queen Essence and King Quincy were on a balcony outside their home in Vibe City a bird snatched one of their eggs. This made Cooper hatch in Pop Village, then known as "Troll Village". The Pop Trolls soon became attached to the little baby Troll, and raised him as their own. Meanwhile, Darnell hatched in the company of his parents, who began to search in hope to find their lost son.

According to their official bios, the Funky Family had to deal with a number of things that occurred during the period thereafter. Essence rose as a leader to meet many challenges that faced them, and even got her people to no longer fear the Pop Trolls returning to steal their Funk music. Meanwhile, Quincy had been focused by the search for Cooper, which had seem futile to the point that by Trolls World Tour he had just about given up hope of finding Cooper at all.

Prince Darnell, known as Prince D, was raised by his parents, who neglected to tell him about his lost brother until they thought he was old enough that he would understand. Darnell grew up always feeling something was missing in his life, but had never known it was a twin in the meantime.

At some point in time, Cooper became good friends with then-Princess Poppy, leading him to join The Snack Pack. Cooper himself was left at risk of death during the events of Trolls, as he was among the Snack Pack members taken by Chef. He was captured twice by her, though he managed to avoid death thanks to the efforts of Poppy, Branch and the Bergen Bridget; he would then lit a cooking pot that sent Chef away from Bergen Town.

When Queen Barb begun her World Tour event, they had been aware of her bid for Rock world domination, and begun preparations.

At some point, they picked up a random Troll lost in the desert. To their delight, it was their missing son Cooper. Upon realising their son had been found they soon reunited their twins. Later, they would pick up Queen Poppy, Branch and Hickory. Though they were reluctant to take on the proposal of combining their music with Pop, they were grateful for the Pop Trolls looking after their missing son all these years. So the family explained the true history of the Strings to Poppy, revealing that the ancestors of Pop had done exactly what Rock was doing now: taking the Strings for themselves.

When the Rock Trolls arrive, the Funk Trolls prepared for battle, as Cooper secures his friends and himself's escape route against Poppy's plea to let them remain. The power to Vibe City was quickly cut by Riff. The family were soon captured and taken to Volcano Rock City.

In Volcano Rock City, Barb held a victory concert. While attempting to use the Ultimate Power Cord on Queen Poppy, Branch got hit the way and was instead transformed into the first Rock Zombie. Quincy and Essence were also converted before Barb turned back to Poppy. After Poppy appeared to have been converted also into a Rock Zombie, Barb tossed Poppy the guitar to convert her father King Peppy, as well as Cooper and Prince D into Rock Zombies. But Poppy had used gumbdrops to block out the Ultimate Power Chord's influence, and soon destroyed the Strings.

The Funky Family lost their music along with all other Trolls soon afterwards, but the Rock Zombies were freed from the brainwashing. While most of the Trolls were saddened by the loss of their music, Cooper realizes he still has music in his heart, and joins in with D in singing. The Funk twins reveal to the Trolls that they don't need the Strings, as they now have music in their hearts. All of the Trolls sung Just Sing, and soon had their music and colors back.

The Funky Family were lastly seen dancing in the Trolls World Tour credits.

Retrieved from "https://trolls.fandom.com/wiki/The_Funky_Family?oldid=67089"
Community content is available under CC-BY-SA unless otherwise noted.