The Snack Pack is a group of Trolls seen throughout the Trolls franchise. Their leader is Poppy, who was the Princess of the Pop Trolls in Trolls, and Queen by the movie's end.

The group originally consisted of Princess Poppy, Cooper, Creek, DJ Suki, Fuzzbert, Guy Diamond, Satin and Chenille, Biggie and Smidge , all of them became friends with Poppy at some point during their time with her, becoming her entourage and her closet friends. The group spends most of their time attending parties alongside her and generally supported Poppy. Because of this, the group originally teased Branch about his grumpy loner lifestyle as it was so contrasting to the rest of the village and was very different to their own. Branch himself also ridiculed the group for their recklessness, thus returned the feelings and even criticized the way Poppy handled things, which caused the group to defend her in response and led to even more ridicule, with Creek being the worst offender.

The group mostly ceased their teasing after they learnt his reason for being the way he is. After the events of Trolls, Branch took the place of Creek among the group and eventually also becomes best friends with Poppy, with the two of them becoming more than friends in Trolls World Tour. Between the events of Trolls Holiday and Trolls World Tour, Legsly had joined the group. The groups' membership in Trolls World Tour consists of Poppy (who's now Queen), Branch, Cooper, Biggie, Fuzzbert, Smidge, Satin and Chenille, Legsly, Guy and Tiny Diamond.

Most of the members' origins are largely unexplored, save for Branch, Poppy, Cooper and Tiny Diamond. The group are mostly Pop Trolls with particular notes that Guy Diamond is a Glitter Troll and Fuzzbert a Fuzzling. Only Tiny Diamond and Cooper aren't Pop Trolls, with Tiny having been born a Hip hop Troll and Cooper being a Funk Troll. Tiny's membership in the group is mostly by association with his father Guy Diamond.

It was stated in the Trolls: The Beat Goes On! episode Meet the Peppy that each of them also went on a Swag Stag hunt with King Peppy after becoming friends with Poppy.

Queen Poppy is the leader of the group of friends. Each member joined the group as they grew close to her and regard her as their best friend.

Branch originally despised the group for their noises, but after the events of Trolls replaced Creek as one of Poppy's closest friends. By Trolls World Tour he is generally taken as the group's second-in-command and Poppy's love interest and later boyfriend.

Biggie is the largest member of the group. He carries a pet worm around called "Mr. Dinkles". In Trolls World Tour, in the absence of Poppy and Branch, he takes over as substitute leader when the group infiltrates the Rock Trolls.

Satin and Chenille are a pair of conjoined twins who are into fashion.

Cooper, is a Funk Troll, a Prince and member of The Funky Family.

Guy Diamond is a Glitter Troll.

Tiny Diamond is part of the smallest member of the group due to him being so young and carried around by his father most of the time. He joins in Trolls World Tour.

Smidge is the member of the group with a deep baritone vocal. 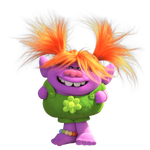 Legsly is the tall, thin member of the group, who joined between Trolls Holiday and Trolls World Tour.

Fuzzbert is a Fuzzling Troll. Despite being a member of the group, Fuzzbert is rarely seen with his friends or even interacting with them.
Add a photo to this gallery

These are Trolls that have left the group or just been dropped by DreamWorks.

Creek was a spiritualist, outstanding member of Troll Village, and one of Poppy's dearest friends until he betrayed her and the entire village near the end of Trolls.

DJ Suki is the village's disc jockey Troll. She didn't return in Trolls World Tour for reasons not yet known.
Add a photo to this gallery

Early concepts show that originally there was to be 14 members of the Snack Pack. The members were designed with a line of squares and blocks to see what worked. The term "The Snack Pack" refers to the plot of Trolls, hinting the purpose of the captured group of friends.[1]

Retrieved from "https://trolls.fandom.com/wiki/The_Snack_Pack?oldid=54157"
Community content is available under CC-BY-SA unless otherwise noted.