The Top Trumps card game normal rules apply to this game as well. Players draw a card they keep in their hand, without revealing the card to the other players. Each round someone calls out one of the cards stats. Everyone then reveals their cards and whomever has the highest number against their state wins that round. They then draw another card and then the next player calls out a stat. The process is repeated until all the cards are used.

This deck is based on Trolls and features various characters from the movie.

The stats for Trolls are based;

Card include Trolls, their critters and Bergens. Each card also included facts about that character.

Characters Poppy, Branch and Bridget have two versions and are the only characters featured with two cards dedicated to them. Poppy has "Poppy" and "Baby Poppy" while Branch has "Branch" and "True Colors Branch". The differences between "Poppy" and "Baby Poppy" is that "Baby Poppy" has all of its stats weak, while "True Colors Branch" has higher stats in everything but survival which is weaker. Bridget meanwhile has "Bridget" and "Lady Glittersparkles", with "Lady Glittersparkles" having all of its stats stronger than "Bridget".

Other characters featured include:

There is also a spare card for making up new characters

This deck is based on characters from Trolls World Tour.

The stats for Trolls are based;

"Courage" simply is a renaming of "Survival Skills", meaning that this deck is compatible with the older Trolls. For some translations, the stat's name hasn't changed at all. Therefore so long as this is noted, players can either mix the two decks into one pile every player draws from, or use them against each other with one player having each deck. Aside from the backing of the cards being different, there should be no problems with doing either method.

The only stat changes occur to the renamed Survival Skill;

While it's unknown why most returning cards lost "Survival/Courage", some are likely storyline-related, though this doesn't explain the others;

The deck lacks a blank card for making up new characters. Non-important stats that are trivia information andt have nothing to do with gameplay aren't included. For example, Poppy's listing as a "Rainbow Troll" is absent on her Trolls World Tour counterpart. 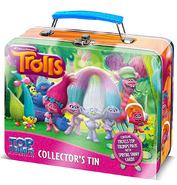 This is a special promotional item. It contains normal Top Trumps cards, but with a foil backing instead of a normal one.

Match 5 is a two-player game in which each player sits on opposing sides of the game-playing section. At the begining of the game, each player draws two cards and they set them in their respective areas. They take turns in pushing out a cube and replacing it with their own, leaving the opposing player with the cube they just pushed. The opposing player then pushes out another cube and puts their cube in its place, leaving the other player with a new cube to put in. Players can't see what each other are doing, and don't know what Trolls they are trying to match. The objective of the game is to match 5 Trolls in a row either horizontally or vertically. They must match 5 of either of their drawn cards, so if a player draws Barb or Guy Diamond, they can only match one of those two.