Conductor of the Classical Trolls

Wolfgang Amadeus Trollzart, commonly known simply as Trollzart, is the conductor of the Classical Trolls, and a supporting character in Trolls World Tour.

Trollzart has an appearance that's almost standard for his people with the same yellow body dashed in glitter, a good luck "wishstone" gem, and a small body proportionate to his head. He has a creamy white hair like many of his people, but what's different is the hairstyle. While it has a tall puffy appearance, the style's not the same as the others. He also stands out by wearing a black coat with golden borders. For some reason, he appears to have thick eyelashes (which are typical for female Trolls of any Tribe), despite being apparently male.

As a Rock Zombie, he has a much darker skin coloration, his glitter on his cheeks are replaced with fragments of rock. His hair mostly stays the same but is now more looser looking. His wings have changed to look more rock-fitted. Now his coat has groves along the edge, and he has glowing red eyes. 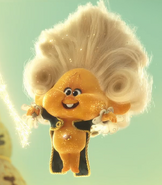 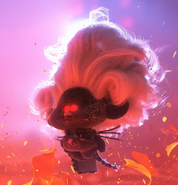 Rock Zombie
Add a photo to this gallery

Not much is known about Trollzart apart from his evident love for his tribe's genre of Classical music. He displayed courage when he and his Classical trolls were confronted by Queen Barb and attempted to oppose her despite being overwhelmed. Trollzart also felt insulted by Barb's comment that his music is boring.

He has most normal Troll abilities, plus the abilities of his tribe.

He's seen leading an orchestra as its conductor. He writes music and has been focused on bringing new ideas into the Classical genre, breathing new life into his people's music and proving Classical music is anything but dull.

As leader of the Classical Trolls, it was his sworn duty to protect his music, including the yellow Classical string (which he apparently kept inside his conductor baton), until the strings were destroyed and the Trolls reunificated as a species.

Trollzart became leader of the Classical Trolls due to his music prowess, producing music that was revolutionary and breathed life into his people. The other Classical Trolls would soon follow his lead wherever he went.

When Queen Barb arrived in Symphonyville to steal the Classical String, Trollzart stood in defiance of the Queen of Rock backed by his Tribe. But this defiance was short-lived, as Barb's Rockers used their own symphonies against the Classical Trolls with a Rock flare to them. The entire Tribe was beaten in an instant by the Rock Trolls' Power Cords. When Trollzart tried to reach for his baton, Barb snatched it from the ground and broke it to reveal the String.

Trollzart and his people were rounded up and taken to Volcano Rock City. Trollzart was put on display alongside the other leaders. He was later converted to a Rock Zombie, along with the other leaders, when Barb played the Ultimate Power Cord using all 6 Strings powered by her own Rock String. Though she appeared to convert the Queen of Pop, she failed thanks to Queen Poppy putting gumdrops in her ears.

After Queen Poppy smashes Queen Barb's guitar, Trollzart, along with the other leaders and Branch, was freed from being controlled. But the destruction of the Strings left everyone with a profound sense of loss as Queen Barb blamed Poppy for destroying all music. Although everyone was initially heartbroken by this apparent loss, Cooper and Darnell began to make music, and it was Queen Essence who realized aloud for all to hear that while their music started with the Strings, it truly came from within themselves, which is something that can never be taken away. Then, King Trollex agreed by declaring music comes from their experiences, with Delta Dawn also adding that it comes from their lives, and Essence from their culture. Trollzart simply says "Beautiful." Then all the Trolls sang together, inspiring harmony between them and restoring their true colors.

Trollzart, with the other leaders, later visited Pop Village to celebrate the harmony of the Tribes.

From DreamWorks Website: Conductor of the Los Angeles Philharmonic, Gustavo Dudamel gives voice to the chubby, cotton-candy-haired leader of the Classical pack. "Bringing Wolfgang Amadeus Trollzart to life will certainly go down as one of my career highlights," says Dudamel. "My favorite moment had to be when Walt and Dave encouraged my young son, Martín, who had come along for the recording sessions, to give some ‘constructive feedback’ on my acting and voice intonation. He, of course, had watched the first movie many times…talk about a tough critic. Introducing classical music into this crazy adventure world was a huge amount of fun!"[1]

The conductor design he had went through many revisions.[2]

Who says classical music is boring? Certainly not Wolfgang Amadeus Trollzart, the wildly passionate conductor and leader of the Classical Trolls. All the Trolls in Symphonyville move in time to the snappy rhythms of Trollzart’s expertly wielded baton, and they all adore their spirited, energetic leader as much as he enjoys wearing a cape with no pants.

With a shock of fluffy white hair and glittery, golden skin, Trollzart is quite an adorable sight to behold…at least for any philistine who doesn’t have a true appreciation of the classics. That’s just what Queen Barb and her rockers discover when they roll into Symphonyville unannounced…and attempt to intimidate the feisty Trollzart into giving up the Classical Trolls’ precious golden string.

Retrieved from "https://trolls.fandom.com/wiki/Trollzart?oldid=53308"
Community content is available under CC-BY-SA unless otherwise noted.