A screenshot of Hickory and Dickory, the only known members of the subculture.

Yodelling Trolls are one of the minority groups of scattered hinterland Trolls of which Hickory and Dickory belong with. The aforementioned brothers are the only known members, leaving some vagueness. It is unknown if other Yodelling Trolls existed before them, or currently besides them. Of all the minority groups of Trolls, Hickory and Dickory are considered to be the most mysterious ones, with Riff quoting them more by rumor than by fact at one point.

Queen Poppy sends an invite to Queen Barb containing a glitter bomb that explodes in her face. In anger, Barb summons the most notorious bounty hunters. The Yodellers didn't show for the meeting, and Riff told her that he heard a rumor about them falling victim to an avalanche.

In reality, the pair infiltrated the Country Troll Tribe disguised as one of them, with Hickory as the head and his brother reduced to being the horse back-end. They bust out Poppy, Branch and Biggie when Delta Dawn throws them in jail for their "crimes against music". Though Branch is suspicious about Hickory, Poppy is convinced her judgement of him is not off. After Chaz fails to take the trio of Pop Trolls, he is sent flying by Hickory, who used Gumdrops to avoid being put into a trance by his Smooth Jazz music.

Hickory and Dickory continue their act throughout the time the group spends with the Funk Trolls. When Branch leaves Poppy after a fight, Poppy carelessly shows Hickory the Pop String which causes Dickory to drop the disguise. The pair alert Barb to Poppy's location and she is captured.

Later, they are seen in the audience at Barb's World Tour victory concert, when Poppy copied Hickory's Gumdrop trick to avoid succumbing to the effects of Barb's Ultimate Power Chord, which made her look like a Rock Zombie but didn't put her under Barb's control due to Poppy using gumdrops as earplugs that she learned from Hickory back at the boat eariler.

Due to Hickory and Dickory being the only members of the group, not much can be said about how Yodelling Trolls generally look like. Even though, the pair wear unique outfits when compared to other Trolls.

Hickory's reaction to eating Gumdrops noted that he found them a bit sweet. He was also seen about to a small grub-like critter with Biggie.

It is unknown what their full Tribal abilities are beyond the standard Troll abilities, except their vocals have the ability to carry over long distances.

Riff's quoted rumor implies that they also have the ability to cause avalanches.

The tribe naturally have a accent, but due to the severe lack of membership not much is known about these Trolls as they simply lack a society.

The only two known Yodelling Trolls are Bounty Hunters. Their techniques involved playing the long game, infiltrating and defending their catch until its ready to be snagged.

Yodelling Trolls love yodelling, but it's implied that Hickory is not so passionate as Dickory is, and is willing to try other genres of music. They view their music as beautiful and will go to lengths to protect it.

Yodelling is a style of singing where the voice sings loudly and rapidly changes between normal and head-voice or falsetto singing results. Yodelling was popularized in the Alps, but has been practiced worldwide in many cultures. Hickory and Dickory's appearances draw inspiration from Austria Crooners.

The Yodellers, alongside all Trolls of the other subcultures, were in the original plot of Trolls World Tour. Queen Barb wanted to destroy all music because she was jealous of the popularity of Pop. In her journey to rid the world of all music but Rock, Barb came across a diner in the middle of nowhere, where Trolls whose music lost popularity ended up. Barb offered an opening slot in her world tour to whomever brought her Queen Poppy. Among them were the Yodellers, who called Barb over to a private booth in the diner after hearing Barb ask for the other unpopular music Trolls for help in capturing Poppy. The presence of the brothers indicated that Yodelling had fallen out of popularity, and that Hickory and Dickory were among the few, if not only Yodelling Trolls left. 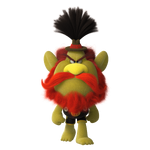